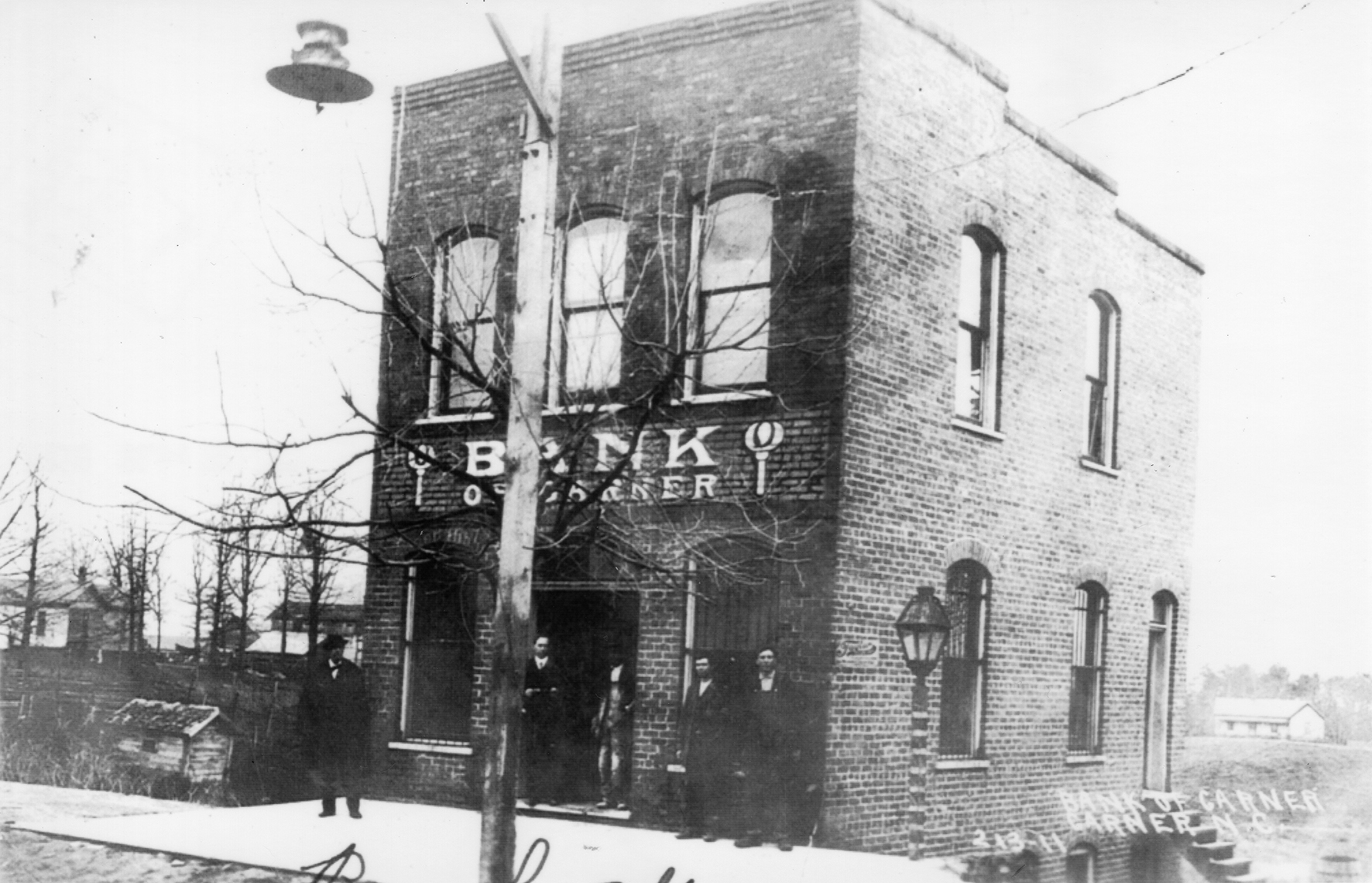 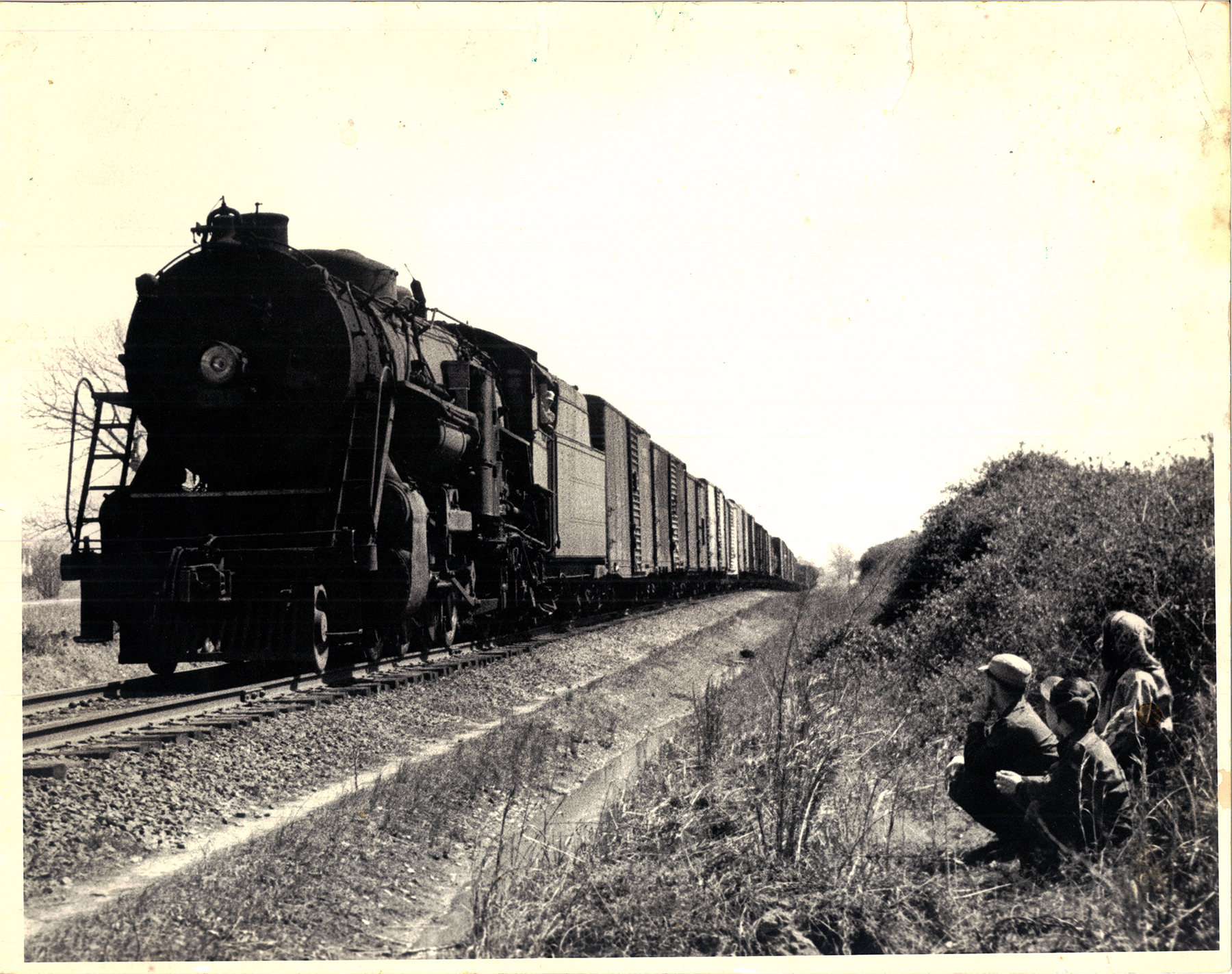 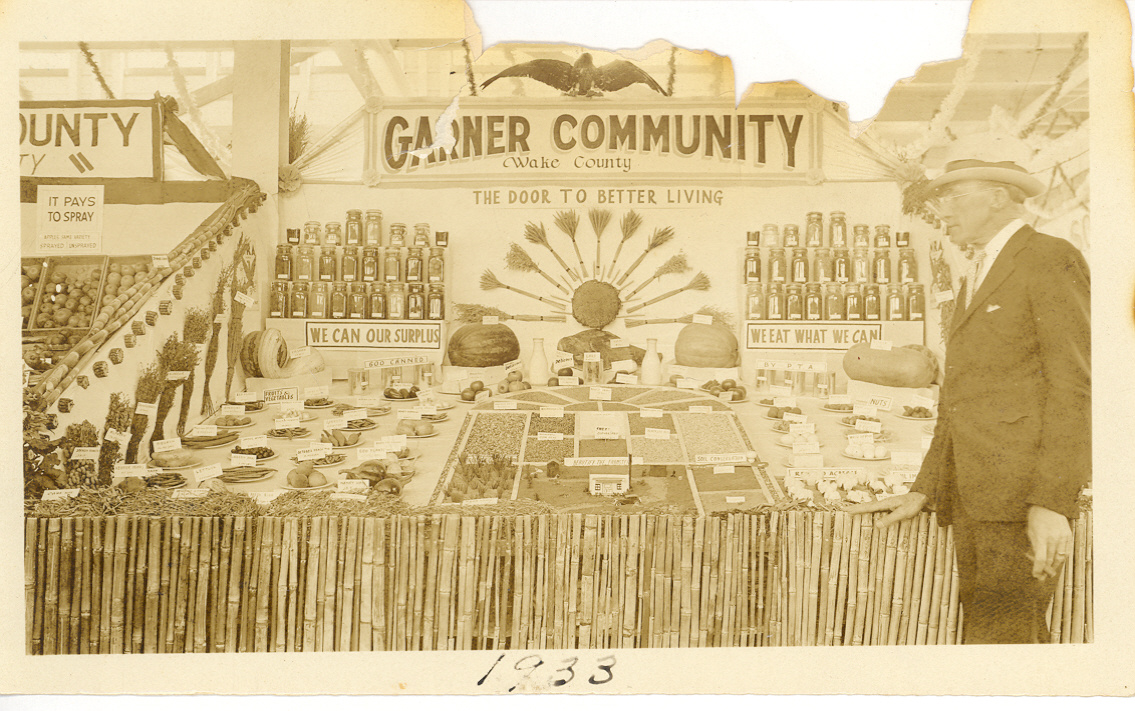 When the North Carolina Railroad was built in the 1850s, it initiated the creation of many towns; Garner is one such town. Garner got its start with the coming of the railroad through the area beginning in 1847. In that year, after a tie-breaker vote by the Speaker of the State House of Representatives, state leaders designated what is now Garner for the location of a new station of the North Carolina Railroad that ran between Goldsboro and Charlotte.

Before the railroad tracks traversed the area that would soon become Garner, cotton and tobacco dominated the landscape; both crops were vital to the growth of Garner through the 20th century. The lack of buildings on right-of-way maps from the 1850s illustrates how sparsely populated this area was. Sometime before 1870, the railroad acquired a “wood and water” stop, roughly located in what is now downtown Garner. Although it wasn’t a depot, the railroad must have contributed to the growth of the settlement area, evidenced by the need for a post office by 1878.

In the closing days of the Civil War, skirmishes occurred in the Garner area, as witnessed by the carefully preserved bullet holes in Bethel Church (now New Bethel Baptist Church) and the still-standing “Samuel Dupree” house, which the Union Army used as a makeshift hospital for their wounded; Union soldiers also camped on the Dupree farm.

In 1874 Henry Fort (1815-1876, married Martha Jane “Jenny” Dunston ca 1876), an African American farmer, cabinetmaker, and carpenter, purchased 52 acres of land from Eli Dupree on the north side of the railroad near Hayes Chapel Church. Moses N. Amis wrote in his book Historical Raleigh in 1913 that Fort was “a fine carpenter who made bureaus, wardrobes, and almost any piece of furniture the people wished.”  He sold off portions of his land to other African American families, including Partha Taylor, Candice Taylor, a midwife, and Thomas Haywood. In 1877 Eli Dupree sold a lot on current Main Street in downtown Garner to Allen Haywood, an African American school teacher.

It is believed that Henry Fort and Thomas A. Bingham had the first businesses in Garner. Bingham, a wagon maker and owner of a general store, made application for a post office, requesting that it be named Garner’s Station. He was the first postmaster for Garner’s Station from 1878 to June 1882. In 1883 Garner’s Station was incorporated and Bingham was the Mayor in 1883 and 1884. Commissioners were Eli Dupree, T. W. Bennett and J. M. Spence. The Constable was E. Rogers.

Garner’s Station was a prospering town with several general stores, yet for unknown reasons, its charter was repealed in 1891.

Once the town acquired a railroad depot it was reincorporated in 1905, this time as the Town of Garner. Garner is situated in the St. Mary's Township, which got its name from a Church of England parish. Built in 1902, the depot, a four-room building with a tin roof, quickly became essential to the community for delivering mail, carrying passengers once a day to Raleigh, and establishing Garner as a local market and shipping point for cotton.

The first Town officials in 1905 were Mayor J. B. Richardson, and commissioners H. D. Rand, J. J. Bagwell, Henry Bryan, M.C. Penny, and Dr. J. S. Buffaloe. These gentlemen were appointed to serve one year or until their successors were duly elected and qualified.

Farming was the chief source of income for the early settlers of Garner and nearby areas, with cotton the principal crop. Landowners were: J.T. Broughton, Eli Dupree and his siblings, W.D. Johnson, William D. Buffaloe, Martha Dupree Gattis, S.G. Holleman, J.A. Spence, M.C. Penny, Willis L. Moring, and G.R. Bagwell. In 1910 the first bank was established in Garner, population 280;  H.D. Rand was president and J.A. Weathers was the cashier. Mayor was J. D. Johnson, Police Chief was W.E. Smith and Railroad Agent and Telegraph Manager for Western Union was G. W. Riddle.

An old map dated 1887 shows Garner connected with the City of Raleigh by a road listed as Holloman's Road. This was a typical country road at the time, unpaved until about 1918. Its importance, aside from its serving as a link between the small Garner community and the state capital, lay in the fact that it was a small section of what was to become one of the oldest and longest traveled corridors in North Carolina, the Central Highway.

The road became jointly known as Number 10 and U.S. 70 on the popular maps of the day. U.S. 70 was the first paved road to be built in the state and was financed by the first bonds sold by the state to build highways.  The Central Highway from the mountains to the sea was started in 1911. The portion of the highway between Garner and Raleigh was paved around 1916 or 1917. During this period, farmers living outside of town purchased a lot on the north side of the railroad on Garner Road and built their city home. Sam Mitchiner recalls going to WWI by way of the muddy dirt road and returning to find it paved. And throughout the decades, countless families have passed through town on their way to the N.C. coast. This section of the highway today is known as Garner Road.

No card playing on Sunday

Early ordinances for the Town of Garner provide a nostalgic glimpse of a simpler place and time. They addressed “disorderly houses, indecent dress, disorderly conduct and public drunkenness.” Further, “no hog, sow, or pig is permitted to run at large in the town; no wagon, cart, carriage, buggy, or other vehicle is permitted to stand in any street at night; no person is to be allowed to play at any game of marbles, cards, ball, or any other game or games on Sunday.”

Another ordinance declared that “any person who shall open any shop or store on Sunday for the purpose of buying or selling, except in cases of necessity, shall be fined One Dollar.” And if found guilty, offenders could incur a fine of up to $10 for each offense of “loud or boisterous cursing and searing in any street or elsewhere in the town limits.” Merchants of this same era were:  H.D. Rand, Henry Bryan, Sam Watts, Sam Dupree, W.E. Smith, Troy Jones, W.T. Moring, C.H. Dupree, and J.J. Bagwell.  Druggist was G.B. Montague, and Dr. J.S. Buffaloe was the physician. Garner United Methodist (formerly Beulah Church), Garner Baptist, Hayes Chapel Christian and Wake Baptist Grove were local churches.

In 1912, telephone service came to Garner. In a short while, there were as many as 10 subscribers. The first switchboard was operated in the home of Vera Jones. The telephone service closed after two years and then returned in 1924 and being operated by Ed Penny and his family.  Electricity came to Garner in 1921. Developments and subdivisions began to appear in Garner in 1923. Garner High School was constructed on Garner Road in 1922, replacing the Garner School that was located on Main Street. Garner Consolidated School was built about 1935 at the present site of East Garner Middle School.

As the town and the region continued to prosper and grow, U.S. 70 was widened and re‐routed to bypass the downtown commercial district in the early 1950s. The “new Highway 70” a four-lane road, cut through many family farms. Commercial development shifted away from the downtown area as shopping centers (Forest Hills Shopping Center and Garner Plaza) and new subdivisions sprang up around and north of the bypass.

Town offices were downtown at the Municipal Recorder’s Court from 1953 until 1968. In those days, the Town made more revenue from court than taxes, according to “The History of Garner,” by Kelly Pattison and Sam Behringer.

Garner Town Hall was located on Main Street from 1958 to April 1966, when the Trustees of the First Presbyterian Church of Garner sold their church on Rand Mill Road to the Town of Garner. Town Hall was at this location until April 18, 1974 when a fire destroyed the building and most of the town records. After the fire employees occupied temporary locations until the new Town Hall was completed on 7th Avenue near Forest Hills Shopping Center.  Dedication of that building and Southeast Regional Library was held on October 26, 1975. Town Hall was at this location for 42 years. It was torn down to make way for the current building, which was dedicated on Sept. 19, 2017.

Today’s culture has deep roots in Garner. Its early townswomen in particular, under the auspices of the Garner Woman’s Club saw to the formation of a public library in 1928, operating and staffing it with community volunteers. The library continued to operate until its merger with the county’s Southeast Regional Library, which was renovated and updated in 2015-2016. In addition, the Garner Woman’s Club fostered the arts and remains active today.

From the early 1960s until recently, local newspapers fed residents’ need to be informed, reflected life at work and at play, worked as a watchdog, aided business in getting their message to customers, and provided a forum for opinions and dialogue on a host of local issues. As papers changed hands and owners struggled to operate as advertising revenue declined, the Garner News folded in 2013. A News & Observer version of local news ceased publication in 2017. Online sources of local news continue to evolve.

The passion of a number of people in recent decades for historic preservation and cultural enhancement, including town government leaders who value the same, has resulted in such amenities as Garner Performing Arts Center. Home to a volunteer community theater, the Towne Players of Garner, and host to performers from Broadway and around the country, it is a Town-owned and Town-operated facility in the old school campus downtown. The historic building includes senior housing as well. Adding to the mix, Garner schools have long enjoyed a reputation for high-quality arts programs for children.

The Town’s parks and recreation department responded to community zeal for cultural quality of life (its longstanding commitment to sports and parkland is well documented), and added “cultural resources” to the department name in 2011 to reflect its ongoing commitment. Outstanding facilities guarantee cultural opportunities practically too numerous to list but are exemplified by the tradition of the Independence Day Celebration featuring the N.C. Symphony, the stunning Garner Veterans Memorial, and a host of other events made possible by parks and facilities such as the Garner Senior Center, the Nature Center at White Deer Park and Garner Performing Arts Center.