300,000 square feet to be built at corner of East Garner and Jones Sausage roads

Garner is about to make a big splash in the Triangle’s Class A office space market.

The Town Council on Monday (Feb. 3) unanimously approved a project that will bring 300,000 square feet of Class A professional office space—with some limited retail and restaurant space—to an approximately 22-acre site at the southwest corner of East Garner and Jones Sausage roads. When the project’s three buildings—each 100,000 square feet—are completed, it will be the largest office park project in Garner’s history.

Garner-based Direct Distributors, Inc., and the Trustwell Property Group out of Raleigh are teaming up on the project, which has been named the Eastern Wake Innovation Park.

“Direct Distributors has been proud to call Garner home for decades, and we are firm believers in a very bright future for the town,” said Erik Keener, vice president of Direct Distributors. “Eastern Wake Innovation Park is a big step towards that future, and we are delighted to have a great partner on the project in Trustwell Property Group. We look forward to seeing these buildings go up and welcome the new jobs and businesses that will come as a result of this beautiful new development.”

The project’s site location is nearly adjacent to White Oak Crossing shopping center off of U.S. 70 (and thus near the I-40/U.S. 70 interchange) and about a mile from the I-40/Jones Sausage Road interchange.

“On behalf of our investment team, we at Trustwell Property Group are thankful for the opportunity to develop such a dynamic project on this amazingly well-connected site in Garner," Trustwell’s Jon Keener said. “Just 10 minutes from downtown Raleigh, this exceptional location is more than ready for a true Class A office space to bring employment closer to where people in the Triangle really want to live, work and play.”

Garner officials also noted the project’s great location. In addition, they see the office park serving as an attractive gateway to Garner’s historic downtown business district, which is undergoing a major revitalization that has included a thriving café and coffee roaster, a recently opened restaurant and bar, several local creative class businesses and a new recreation center that will open in the coming months.

“We see this location as particularly enticing to tenants,” Mayor Ken Marshburn said. “It offers convenient access from I-40 and U.S. 70, and it’s near White Oak and our historic downtown, which is an emerging hub for new businesses and for a variety of entertainment and recreation opportunities.”

Garner Economic Development Director Joe Stallings expects the project to enhance Garner’s profile in the region. “It will open up very promising opportunities for the recruitment of new businesses and the expansion of existing ones in Garner. It’s something Garner has never had, and it will change the way economic development prospects view us.”

The office park’s developers will add turn lanes on East Garner and Jones Sausage roads at intersections with the driveway entrances to the project. They also agreed to provide right of way for the future realignment of Jones Sausage Road from East Garner Road out to U.S. 70.

For more information about economic development opportunities in Garner, please contact Economic Development Joe Stallings at jstallings@garnernc.gov or at 919.773.4431. 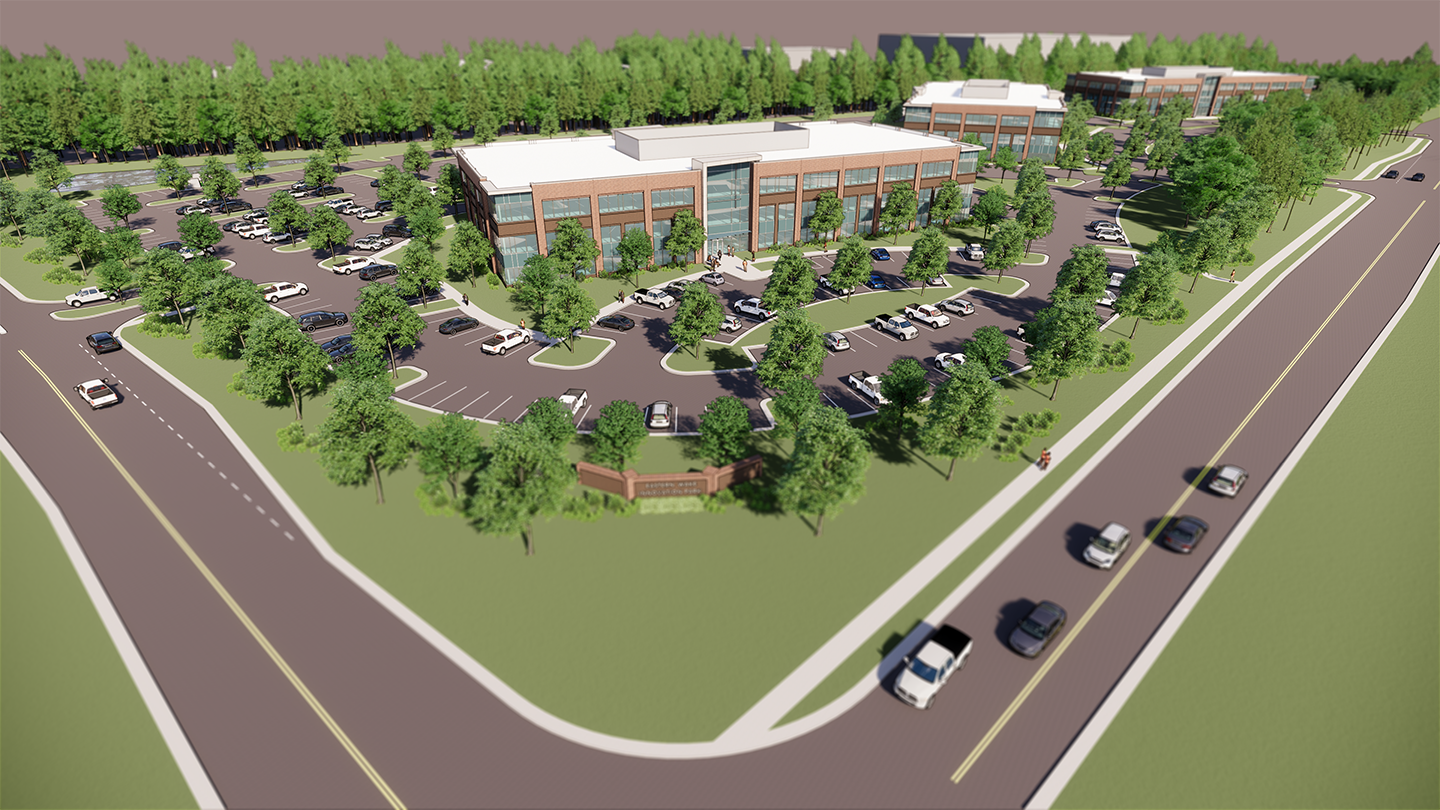 A rendering of the Eastern Wake Innovation Park, which will be located on the southwest corner of East Garner and Jones Sausage roads.